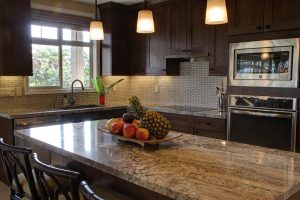 “I’m sorry, darling.” Darren smiled nervously at me.  “But it is only twice a year, and it is only from Thursday to Tuesday.”

I took a deep breath.  “Of course, I know.  Your mother and I don’t see eye to eye, but that’s okay.  She’s your mother and we both love you.  That’s why I’ve got the day off to get the house all set up for her.”

Darren winced.  “I’ll pick her up from the airport.  I’ll pick up a takeaway on my way back.”

“Absolutely not.” I said firmly.  “I’ll make a lovely casserole and that way it doesn’t matter if you are a little late.”

“Thank you, darling, I do appreciate it.” Darren gave me a quick kiss and hurried off to work.

Pamela, my mother-in-law, did only visit twice a year, the first weekend after the Christmas break and the first weekend in July.  It was some awful ritual where a demon was unleashed twice a year.  They could make a Nicholas Cage movie out of it.  As for the takeaway, I was not falling for that again.  Four years ago I had made the mistake of allowing Darren to pick up a pizza on the way back.  For the last four years I had been hearing about how a proper wife made her husband meals, no matter what the circumstances.

I slouched into the kitchen.  I had never felt less like being a domestic goddess.  It was all so humiliating.  I was far too particular, according to my friends, and wasted far too much time cleaning.  According to Pamela, I was a slattern.  Every inch of this house would be scrutinised.  Last time I thought I had her.  There was no dust on the top of the kitchen cupboards and the walls had been washed down.  I had put brand new bedding on her bed and I had dusted behind every stick of furniture.  I had had the oven professionally cleaned and steamed the carpets.  The old witch had actually taken the drawers out of her dresser and found dust on the inside of the frame.  She had been so smug, sitting opposite me in my kitchen, eating my food which I had cooked, while Darren sat between us, twitching.

I looked around my lovely, clean kitchen.  Not only would she go over the room like a forensic detective but she would also sigh and complain that it looked too bare.  “It’s a shame you don’t have any knickknacks around,” she had said last time.  “Of course, not everyone has a flair for decorating.  Perhaps it is just as well that you haven’t tried.” She had smiled a wide, fake smile and patted my arm.  “I’ll bring you some nice things next time I come.  Then you won’t have to worry about getting it wrong.”

The old trout had great taste – for 1972!  I knew that she would have a suitcase full of cheap tat when she turned up, and that it would have to be in the same place she left it when she returned six months later – and she would know if the plastic grot had been moved an inch.  I swear the old bat had a photographic memory.

I threw together a boeuf bourguignon and put it on slow.  I’d already taken out every removable drawer in the house and cleaned behind them.  All the carpets, curtains and rugs had been steamed last week.  Not only was the bedding in her room new but so was the curtains.  I’d cleaned all the lampshades yesterday and dusted all the lightbulbs.  I sighed and started to pull out the fridge.  Then I paused.

Why was I playing her game?  Why was I running round in circles trying to get her to like me when nothing short of a sharp blow to the head would ever make her accept the woman who stole away her baby boy?  I’d been doing it wrong for years.  If she ran out of things to check I swear she would pull up the floorboards.  Okay, if she wanted something different, she could have something different.

By the time Darren’s car pulled into the drive I was finished.  I ached with the efforts, and I had had to get a few friends to help out.  It had been entirely worth it.  I looked around as I heard Darren carefully reversing into the garage.  The kitchen was smeared with jam and I had done my best to give a greasy feel by spraying the wall with the oil spray I used in cooking.  I had found some kitchen curtains in a skip which were now drooping at the window.  I had gone to every friend and neighbour and scrounged the contents of their vacuum cleaners.  After some trial I found that a light mist of water helped the dust of a dozen homes cling to walls, sink and bath.  I had put a mouse trap at the back of her dresser, just where it would get her if she checked, and I put the contents of four dryer filters under her bed.

The trip to the charity shop had been the most fun.  The house was awash with ‘accents’.  Our house was now a temple to the worse taste that ever landed on an Oxfam donation table.  There was plastic everywhere.  I had also got some extremely washed bedding from the charity shop and begged some curtains for Pamela’s room that they were going to send to the rag man and rubbed damp instant coffee granules along the edges for an added artistic touch.  I had had fun, and so had my friends.  Everyone had got photos.

I turned round as Darren unlocked the door.  “Darling, my mother’s plane has been delayed and she has decided not to come until the Christmas break after all…” He stopped as he walked in to the kitchen.  There was a long pause.  “Darling, would you like a drink?”