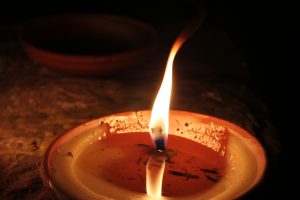 Zoe sighed.  It had been a long day at work but now she could relax.  She could have a salad and a glass of wine in peace.  Mark would be over later, and they could watch a film before another romantic night.  She felt that her life was perfect.  She set the table in the dining room, lit one of her favourite candles and uncorked the wine.  There was a knock on the door.

“Hello, Zoe.” Ryan pushed past her.

Zoe couldn’t breathe.  She shut the door and leaned against it as she watched Ryan saunter up the stairs.  What could she do now?  For a short, awful moment she listened to Ryan moving around upstairs, then she forced herself upright, went into the dining room and poured herself a glass of wine.

“You know I don’t like you drinking.” Ryan said.  “And you’ve redecorated.” He looked around.  “In fact, this is the only room that’s still fit to see.  You never understood how to achieve elegance.”

“I cremated you.” Zoe drained her glass.

“Apparently there was a mix up at the morgue.  I was embalmed instead.” Ryan turned around mockingly, flexing his shoulders.  “And I’m not in bad shape.  I’ve no idea who I was swapped with.  Obviously they enjoyed golf.” Ryan threw a golf glove on top of Zoe’s salad.  “I told you again and again that salad isn’t a real meal.”

“And I told you again and again that you needed to eat less meat.  That’s why you died of a heart attack.” Zoe poured herself another glass of wine.

“And I warned you that I would come back from the grave.  When I was dying I was very clear.  The house was to remain exactly as it was.  You were to dress in black and remain faithful to my memory.  Not that bit of rubbish you’re wearing. You’re thirty-three, Zoe, not a teenager.”  Ryan smiled thinly.  “But here I am.  I don’t suppose you kept my clothes as I instructed.  Wearing another dead man’s suit isn’t my style.”

“I sold your clothes.” Zoe said quietly. “I sold your car, your record collection, your shoes and your power tools.  I don’t know if I can divorce a dead man, but I am not staying.”

Ryan grabbed her wrist, hard.  “The only place you are going tomorrow is work and then to buy new wallpaper.  What were you thinking?  You’ve painted everything, it’s just not good enough.  You should be glad I’m back.”

“You can’t make me.” Zoe said, tugging her hand away from the unexpectedly strong grasp.  There was a giddy rush.  She had never said that to Ryan before and he wasn’t expecting it.”  You can’t make me do anything.  After all, you can’t stop me having money for the bus fare to work as all the money is now in my name now, legally.”

“I never liked you working in that office.” Ryan muttered.  “There were too many divorcees.”

“You can’t hide my clothes.  I’ve got a suitcase stashed in my car for the weekend and the money to get new stuff.  I have friends that would worry if I didn’t get in touch after a few days and a very nice boyfriend who would definitely come to claim me.” Zoe defiantly poured another glass of wine and took a long drink.  “I’ve just got a promotion.  I’m an Area Manager now.”

“Don’t be ridiculous.” Ryan snapped.  “We both know you’re too stupid to get a decent job.  That’s why I wanted you at home, to protect you.” He looked away from her.  They both knew he was lying.  “And I told you, I don’t like you drinking wine.”

“Pour the wine away, you stupid girl.” Ryan loomed over her.

“I could call the police and say that a strange man has forced himself in here and could he come and get you.” Zoe said recklessly, drunk on the sudden ability to disagree with her revenant husband.

“I would say I was your husband and point to our wedding photos.” Ryan paused and looked round.  “There are no photos of me.”

“I burned the lot.” Zoe took a deep breath.  She had to keep her head.  “This house is in my name only now.  You have no right to be here.  I want you to leave.”

“This is my house and you are my wife.” Ryan snapped and grabbed at Zoe.  She jumped back and ducked behind the table.

“I really loved you, really, really loved you.  When you died I cried for weeks.” Zoe made a grab for her car keys.  “But I’ve made a new life and I’m alive and you’re dead.”

“Come here!” Ryan lunged desperately at Zoe across the dining table, knocking into the candle.  It fell against his sleeve.  Zoe screamed as the flame caught hold of the fabric and raced up the sleeve.

“What’s happening.” She looked round for something to throw over him.

“I was embalmed, you stupid girl.  I’m flammable.” Ryan was panicking.

Zoe tried to remember her training.  “Lie down.” She pulled up one of the rugs.  “I can smother the flame.”

Ryan screamed.  The flames had caught hold of him now and he was burning up.  “Do something you stupid girl.” It was too late.  Ryan threw back his head and howled as flames gushed from his mouth.  The stench was unbearable.  Zoe tried to throw the rug over him but Ryan staggered away, stumbling into the wall and leaving scorch marks and ash.  Then he crumbled.

Zoe methodically dampened down the scorch marks and opened all the window.  She looked at the ash covered, burned carpet, the marks on the wall, the soot on the ceiling and sighed with a sort of relief.  Even Ryan would admit that she had to redecorate now.