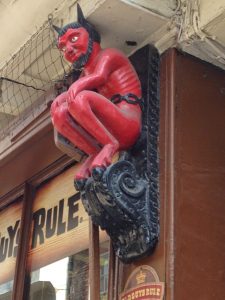 “Don’t worry about a thing.” Trevor smiled with deep reassurance at the nervous store owner.  “The restoration will be completely sympathetic and we will be using authentic materials and techniques throughout.  It will look just like it was first built all those centuries ago.”

“I was warned about the little imp figure.” Mr Oliver had only recently bought the shop and was beginning to get unnerved by some of the unexplained happenings.  “Apparently if he isn’t painted red bad things happen.”

“Red is the authentic colour for a figure of that type.” Trevor mentally added another £100 to the eventual bill.  “And we will, of course, be using the type of paint authentic to the period.  You would not believe some of the shoddy attempts we’ve seen.  People think it’s find to go slapping modern gloss paint over medieval plasterwork.  It’s a shame really.”

“I’m not really bothered about the paint type.”  Mr Oliver said faintly.  “As long as it looks a bit better.  Of course as it’s in a conservation area I have to be a bit careful.”

Internally Trevor sighed and took £100 back off the bill.  “We are craftsmen, aren’t we Ryan?  We like to live up to the skills of the old masters who painstakingly put together these amazing works of art.  We think it’s important to keep the old traditions going.  It would be tragic if the old skills were lost.”

“Tragic.” Ryan agreed from up the ladder next to the imp.  “I mean, who puts an early twentieth century piece of chain on a medieval carved figure?  It would make you cry.  I’d say this chain was about 1932.”

Trevor made a mental note to warn Ryan about overdoing it and all three followed the chain with their eyes as Ryan threw it down on the floor.  As one they froze as a wicked chuckle came from out of nowhere.  Then they all slowly looked up at the red imp.  It wasn’t there.  Trevor swallowed.  “Of course I do know someone who does a very good rate in absolutely authentic carved wooden figures.”

Mr Oliver sighed a little with relief.  Looking into the shop it already seemed a bit emptier.  “I think that’s a splendid idea.”