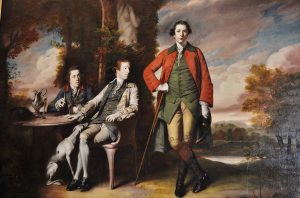 Once again I am taking the Trifecta Challenge to write between 33 and 333 words on the prompt ‘3: to change by artful or unfair means so as to serve one’s purpose : to doctor’

Kent waved the letter at his wife.  “It’s the valuation.” He ripped it open.   Rupert watched carefully.

“You can’t be thinking of selling it.” Alison said.  “It’s been in your family for generations.”  Her voice dropped to a whisper.  “And you know painting is haunted.  Look what happened last time it was sent for cleaning.”  Rupert nodded.  At least someone else was paying attention.

“Those sort of accidents are normal for a house of this age.” Kent looked uneasily over his shoulder.  “And we have to face reality.  We are in a Grade I listed English Stately Home with a leaking roof.  We can’t just get any old tiles from the local builder’s yard and get the cheapest quote plus scaffolding.  Did you see how much the only firm I could track down wanted?  We need the money.”

“Do you want to sell it?” Alison asked as Kent pulled the letter out of it’s rich, cream envelope.

Kent shrugged.  “No, I don’t.  It’s part of the place, I was fascinated by the old man in the picture as a child.  But sentiment won’t patch the roof.”  He absently straightened out the letter.  “I wish we didn’t have to.”  He straightened his shoulders.  “And if I’m not getting a good enough offer, I’m keeping it.  There are grants, after all.”

Jenkins stuck his head round the door.  “It’s Soames about his business proposition.  He’s in the study, sir.”

Rupert waited until Kent and Alison had left the room and inspected the letter.  He concentrated.  Kent would certainly sell for £350,000 but while the figure was flattering, he could not let the portrait go.  It took some work to manipulate it but by the time Kent got back the offer was £35,000, take it or leave it.  The old ghost knew that Kent would never settle for that.  The portrait would be safe for now.  Rupert tapped his ghostly finger on the polished mantle.  Now how could he help with this business idea?