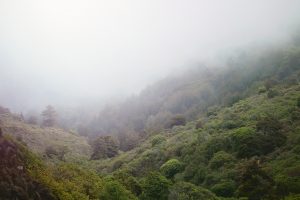 They got Jenkins just as dawn broke and the mist was sidling away from the valley.  It was elfshot, straight in the chest above the heart.  We carried him back as he raved, our legs dampened and cooled with the morning dew and the light spilling golden through the mist and down the valley.  Into the farmhouse we took him and put him near the roof with a Bible next to his bed and a rosary over the bedstead.  The priest was slow to come but prayed hard when he came and someone was always watching as Jenkins told us about the sky kingdoms sailing through the skies like swans and cooed at pictures on the walls that only he could see.

The hen keeper could hear his shouts as she collected her eggs and topped up the water trough.  The cows being milked in the cool dairy with rowan twigs hung above the stalls could hear his cries.  Neither the doctor not the priest could pull the elf shot as Jenkins sang wildly as if under a mackerel sky.

He died at sunset, not well, and we did not bless the day the Shining Ones, the Fair Folk, the Faerie returned.