“I miss him.” Geoff said, looking around the hall.

“So do I, but I hate admitting it.” Stephanie took off her Chanel coat and hesitated for a moment before hanging it on the peg next to Uncle Jeremiah’s dusty jacket.  “He never approved of me.”

“Or me.” Geoff took off his own faded jacket.  He thought it was quite a spectrum as he hung his jacket up next to his wife’s fuchsia model.  Uncle Jeremiah’s old jacket was probably older than most vintage cars.  Stephanie’s up to the minute coat was probably worth more than most vintage cars and was absolutely right for a top flight barrister.  His own humble raincoat was not as old as Uncle Jeremiah’s but was far more battered and had been bought only with practicality in mind.

“I looked over the will.  It’s not worth contesting, but what was his solicitor thinking?” Stephanie ran a finger over a dusty table and shuddered.  “I mean, the house is signed over to us, all the bank accounts are closed and the estate is considered settled.  But there is still around a million pounds unaccounted for.”

“It’s not unaccounted for, according to Colin.” Geoff had not had a good opinion of the solicitor.  “It’s hidden in the house.”

“To be precise, the whereabouts is hidden in this house.” Stephanie sighed and got out her phone.  I suppose I had better start making a list.”

“What do you mean?” Geoff opened the door into the sitting room and wandered in.

“Well, a list of what we need to do.” Stephanie followed him, automatically straightening some sagging cushions.  “It all needs a deep clean and we should probably redecorate.  This is a beautifully sized room with a great view of the garden and we could strip out all these bookcases and go for something more minimalist.” Stephanie trailed off as she checked the side table and adjusted an ornament on the mantelpiece.

“It wouldn’t be the same.” Geoff said.  He stood motionless in the centre of the room, an older, greying man with a nondescript sweater and faded jeans as his curated, blonde wife darted around the room, unable to stay still.

Stephanie paused.  “No, it wouldn’t.  I can’t imagine it changing.  It would be like losing another member of the family.”

“It needs a good clean,” Geoff said, “And perhaps a lick of paint, but I can’t imagine it ever changing.  There has always been a sofa at that angle, so that you can watch the birds in the apple tree outside.”

Stephanie tested the sofa with a cautious hand.  “Do you know how hard it is to get hold of a decent upholsterer these days?  But it’s sound.” She checked the small bookcase in the corner.  “I mean, I can imagine replacing the sofa but putting the new one in the same place.  I can imagine different books in the bookcase, but I there always has to be a bookcase here.” She sat down suddenly.  “I wish we had seen more of Uncle Jeremiah in the last few years.”

“My nerves couldn’t stand it.” Geoff said, sitting next to her and taking her hand.  “He would be arguing that you should be at home in the house and why wasn’t I in the London office.  You would be arguing that he was an old fossil and when was he going to get out of the nineteenth century.  He would be complaining about how much you spent on handbags and you would be complaining that he hadn’t replaced his wreck of a car.  It would be murder.”

“He didn’t understand us.” Stephanie looked around.  “But he was always there.”

“I know, my dear.” Geoff said.  “The problem was, he was always there with an argument.  And then your career took off and I was busy with the kids.  There was never the time.”

“At least you called him.” Stephanie’s thin fingers clung to Geoff’s sturdy hand.

“I rang for a listen at least twice a week.” Geoff agreed and smiled.  “Come on, let’s look around.  According to Colin, we need to have a grave insight.”

Stephanie snorted.  “I suppose we need to look out for stone crosses.”

“That would fit Uncle Jeremiah’s sense of humour.” Geoff helped his wife up and they wandered back into the hall.

It was hard, going from room to room.  Every room had a ghost of an argument and a swathe of happy memories.  The study was the hardest.  It seemed to have become Uncle Jeremiah’s living space, with a tray for his meals sat on a table near the door with a salt cellar perched in the corner.  Photographs were everywhere you looked.

“Look, do you remember this?” Stephanie picked up a picture.  “It was the summer after we married.”

Geoff looked over her shoulder.  They looked so young in their dated clothing, sprawled on the unkempt lawn at the back and filled with joy.  “I remember.  We had the most amazing time.  We had most of our meals in the garden, played cards for matchsticks every night and you and he had a ding dong battle about the Children’s Act.”

Stephanie shrugged and put down the picture, wiping her dusty fingers on a tissue as she wandered around the room.  “Geoff, come and have a look at this.”

Geoff followed her to a dim corner.  “That’s a lovely picture, and it’s full of graves.  Perhaps it’s a clue.”

Stephanie looked hard at the painting.  It looked nineteenth century, with dark, small leaved trees and sprawling shadows.  Graves framed the path to a ruined church and it pulled you in to its sombre centre.  “If Uncle Jeremiah was here, we would be having an argument right now about Romanticism versus Classicism and I would be quoting Byron and he would be talking about Tchaikovsky.” She swallowed a lump in her throat.

Geoff leant forward.  “I bet this is the clue.  This tells us where the money has been stashed.”

“I suppose so.” Stephanie straightened the picture.  “It’s got graves on it.  Perhaps we need to count them or something.”

“At least it doesn’t refer to his grave.” Geoff said, his head to one side as he studied the picture.  “He was cremated and his ashes scatted at sea.”

“He said he was going to do that so I couldn’t dance on his grave.” Stephanie took a deep breath.  Hardened barristers did not cry.

Geoff frowned.  “It’s not a very good clue.  I mean, shouldn’t it have a map or a motto or something?”

“You are a genius with numbers, my darling, but you never worked out how Uncle Jeremiah’s mind worked.  The grave is a red herring.” Stephanie lifted the picture down.  It was surprisingly light and left dust marks across the sleeves of her silk blouse.  “He would never give us a plain clue.” She turned the painting over.  On the back was a small key and a nondescript envelope taped to the corner.  She laid the picture face down on the desk and picked at the tape holding the key as Geoff worked the envelope free.

“It’s numbers.” Geoff said, spreading out the slip of paper.

Stephanie wasn’t paying full attention.  The key was small but well made.  She looked around the room and the large, mahogany desk had keyholes in its drawers.  She found which lock the key fitted on the third attempt.

“At least, it’s numbers but I don’t think it’s about the numbers.” Geoff said.

Stephanie turned the key in the oiled lock and pulled open the drawer.  It held a handbag, a beautiful, Hermes Birkin bag, in her favourite fuchsia pink.  She picked it up and stroked the immaculate surface.  The clasp moved easily under her fingers and nestled inside the perfect lining was a note addressed to her in Uncle Jeremiah’s spiky handwriting.

Dearest Stephanie, Over the years I’ve come to appreciate more and more that while you may not be my idea of a good wife, you are perfect for Geoff and an asset to the legal profession.  Please forgive an old man his mistakes.  And don’t go spending all the money on handbags.  This one should be enough. Jx 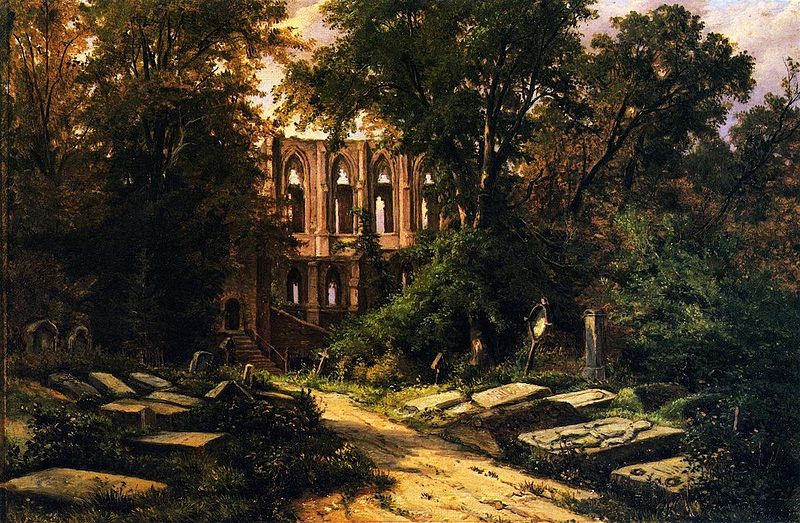 Image taken from WikiCommons, Cemetery by a Ruined Church by Hermann Lungkwitz, in the public domain