It started when the house along the street blew up.  We were told it was safe and I suppose it was.  The houses either side of the gap were fine and there was no trace of gas or anything.  But that night the tapping started.

First it was on the windows, a light, tap tap tap, like a branch against the panes in a light breeze.  Except there were no branches near my window.  Just the tap tap tap after dark.  It started to unnerve me.  There was never any trace when I pulled back the curtains to look and nothing seemed out of place when I looked at the windows from the street in daylight.

Gradually I got used to it and talked about perhaps it was mice or birds in the attic.  I even added it to the ghost stories that were exchanged at work – I live in York, after all, and there are always ghost stories.  However, as the nights grew longer and the days got cooler, the tapping changed.

It was the day after my birthday, 22nd of September, when I sat bolt upright in bed.  The tap tap tap was now coming from the living room.  I remember how frozen I felt, pinned to my bed as the gentle tap tap tap seemed to patter against the wooden floor.  I crept to the door of my bedroom and listened.  There were no human footsteps, no rustle of clothes and no sigh or grunt of someone moving.  I opened the door just a crack, peering out into the hall.  No light shone from under the living room door.  As I gathered my courage to confront the noise, the tap tap tap faded away and I realised it was dawn.

That was three days ago.  I forgot about the tapping as I went away for work.  I lost myself in the hectic pace of the conference and the after conference drinks, happy to forget about strange noises, but now I was back.  There was no sign of any disturbance in the house.  Nothing had moved.  I had a quick shower and got into bed with Netflix playing loudly as I wriggled down into the bed.

But it didn’t drown the tapping.  I can hear it now, tap tap tap in the living room.  I am lying here, terrified, as the tap tap tap gets nearer and nearer.  The tapping is in the hall now and getting closer to my door.   I pick up my phone from the bedside cabinet and scroll through my contacts, looking for the number that had been forced on me.  Now I was desperate.  I found the name – Rev D King, Exorcist.  My fingers trembled as I dialled the number, burrowed under the covers.  Dawn is two hours away and the tapping is getting closer. 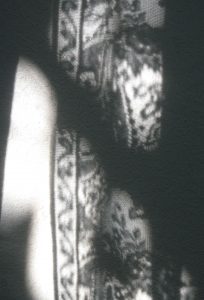