This week’s Fairy of the Hour is none other than Cinderella’s own Fairy Godmother, Sabine Cantrelle. 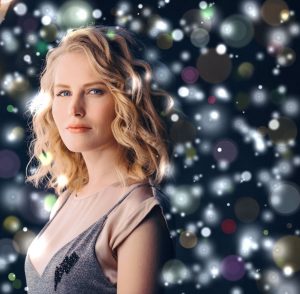 Sabine is not your ordinary Fairy Godmother, though some on the Fairy Tale Council wish she was. She can’t help it if she has a mind of her own. To be fair, it’s due to that ability to think for herself that she has so much success. Once slated to be the worse Fairy Godmother in history, she was able to turn a difficult job into a life changing opportunity and has become a leader among her kind. Let’s get on to the questions.

– *snort* “Fantastical, my foot. You mortals always think that because we have magic life is…well a fairy tale every day, but that couldn’t be further from the truth. Magic has restrictions. We can’t bend wills, or change minds. We can persuade, but even then, it’s not always what you intend. Magic is a tool, and like any other tool, it alone can’t fix everything. As for being a Fairy Godmother, honestly?” *She leans in and whispers* “I love it. But don’t go around shouting that I told you. I have a cool and detached reputation to maintain.” 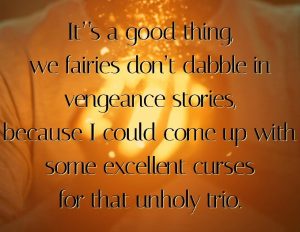 – “Well I’m not the pink tutu wearing, always smiling, ‘happy to serve you’ kind of Fairy Godmother. This job’s work. A lot of work. Especially the way we do it now. After working with Cinderella, it all changed. So, I have to appear to be aloof, unattached if you will, or everything just gets more complicated.” 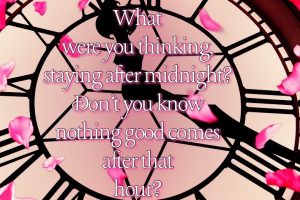 – “Favorite?” *laughs* “I could get fired for answering that question! Not supposed to have favorites. Let’s just say Cinderella taught me an awful lot, and I’m very grateful.” 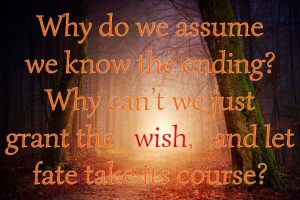 -“Ugh, it’s a long story. Some grow up wanting it. Others are coerced into it because of ‘family business’ and all that. Then you have those who just kind of accidentally find it—I’m the latter. It’s a great story actually, but to tell it would take up more time than we have, so I think I’ll just say this: curiosity killed the cat, but satisfaction brought it back.”

– “Ya know, us Fairy Godparents are just supposed to do our job and then move on, but there are a few charges I keep in contact with. A genie named Juan, this poor soul known as the Big Bad Wolf, and Cinderella are definitely in that group. Last I heard she’s happy as can be. Even named a kid after me.  Not a human one, one of the goat variety. I’m pretty sure it was that dang Innkeeper’s idea—oops, spoilers. I better stop before I give it all way. 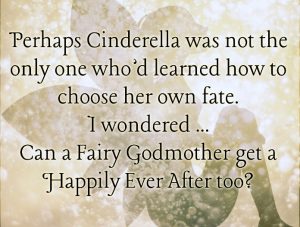