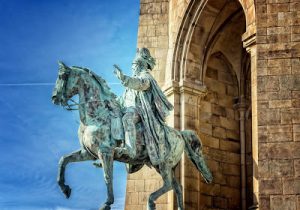 Many walk past his statue.  School children sketch it and history teachers wave wildly as they walk its bounds.  His name is in legend.  But for those who have the sight, his ghost huddles at the foot of the bronze, sobbing inconsolably, his hands shielding his head, as he remembers the blood shed in his wake.

For more great reads, awesome insights and generous giveaways, check out these authors taking in part in October Frights!

Steve looked at the foul imp digging its claws into his expensive suit jacket.  “Are you sure it is this way?”

Armani belched, spat and scratched the dirty, tiny t-shirt covering his stomach.  “That’s the way.  Lord Darcy is through there.”

Steve stared at the wooden planks across his path.  Why the hell had an elfen decided to call himself ‘Lord Darcy’.  Where had he picked up the stupid name?  The elfen lord would no doubt be wearing a velvet jacket and a lace up shirt.  Steve leaned closer to the planks.  The trouble with these older faerie lords is that they were insanely powerful.  They were insane, they were powerful and this one wanted Steve to do something for him.

Steve considered turning back.  A large trunk of guaranteed genuine medieval prayer books would fetch a very good price – but he had to strike the deal first.  Was the money going to be worth the risk?

Steve tentatively touched the wood.  The grain of the planks ran from left to right, he could feel the tiny ridges and valleys and smell the pungent creosote.

“Seriously, boss, not real.” Armani chuckled coarsely as Steve pressed his fingers against the unyielding wood.  Stretching out his wings, Amani hovered in Steve’s eye line.  “Watch this.” Armani flapped forward and passed through the barrier as if it was mist.

Steve pressed his palm against the cool, grooved wall.  It was still solid.  Armani flapped back into view.  He tugged nonchalantly at one of his tattered ears.

“Actually, boss, there’s a forty-foot pit with iron spikes on the other side of this.  I think we need to find another way.”

“A pit with iron spikes?” Steve said levelly.  “I was asked here, I don’t need to do this trade.  Why are we getting these tricks?”

Armani shrugged.  “Powerplay, ego trip, practical joke, fear that if he looks weak you’ll rip him off, placating an awkward courtier, worried about werewolves, forgot he put it here, someone else put it here to screw the deal, proving that you were up to making a deal with an elfen lord – take your pick.  You’re the one that makes the deals with elfen.”

“How would it look if I just turned back?” Steve stepped back and looked at the barrier.  Armani shrugged again.

Steve took a deep breath.  He hated the elfen playing mind games, but this was a test.  He strode confidently forward and through the planks as if they were just a dream.  For a heartbeat his foot seemed to hover above the steep sided pit and the iron spikes and then was placed confidently onto the solid stone floor.  He glanced at Armani.  “Since when did ancient elfen tolerate iron.  The older the faerie the less they can bear it.  However, I don’t like being tested.” Steve was well aware he was being overheard.  “My commission has just gone up.”