I dipped into this as something light to read. I love reading different takes on the Fair Folk, so this seemed like a good choice.

One of the best parts of this book is the world building that is subtly going on behind the scenes. You are plunged into the middle of the action as the exiled Queen Sentina and her bodyguard find a way to travel from their place of exile to the human realm at Christmas time. As the plot unfolds, small details of the world and its inhabitants leak out, so you find yourself gradually immersed in the background rather than suddenly having a lot of detail dumped on you.

I also liked the portrayal of the nature of the supernatural beings. I grew up thinking fairies were not safe, and this story echoes that impression. The Fair Folk are portrayed as scheming, difficult and indifferent to mortals and it’s incredibly entertaining, especially when they end up in our realm. The characters were shown to be unfamiliar with mortals and their culture and the clash was incredibly well shown.

I enjoyed the pace of the story, as it rattled through the entertaining scenes. There was some sex, which I thought was quite well handled. I don’t read much erotica, but I was glad to see that the sex was part of the plot, rather than the plot being an excuse for the sex. I suspect that sex will be a greater part of the plot in any subsequent stories.

This was a relatively short story. However, at the end of the story they advertised a trilogy that seemed to be focused on the same characters. I shall look out for it with interest.

I loved Charlie N Holmberg’s Paper Magician series so I was really excited to dip into her new series. I devoured the book in an afternoon and decided I had to write a review.

This is so much darker. Ms Holmberg paints the world beautifully, giving the right combination of detail and hints. The complex setting gradually unfolds as the characters progress through the smoky, polluted city, a metaphor for the corrupt and desperate society.

This dystopian setting is a wonderful backdrop for the two main characters. Sandis, the slave mystically linked to something dreadful from another plane of existence, and Rone, the rogue who tries to make the right decisions and gets things dreadfully wrong at times. The layers of their respective backgrounds and the stories that have made them are gently peeled back through the course of the well paced story.

And, darn it, the story ended on a cliff hanger and I can’t wait to read the next book. I totally recommend this story.

The story of FBI Agent Sierra Lancaster and her interactions with the people around her is potentially gripping with plenty of twists and turns.  There are old flames, FBI agents, partners, sort-of-estranged relatives, shoot-outs, deals, busts and a whole swathe of difficult and challenging interactions.  I am a sucker for complex interactions and intricate layers of relationships and this is almost awesome.  I found myself muttering as I read because it isn’t quite there, and it could be.  I would almost be enjoying a sudden revelation, but the foreshadowing hadn’t quite hit the mark.  I would be almost caught up in a character’s development, but it wasn’t quite consistent.  I would be almost hooked on the story but some of the details didn’t strike true.  I finished this book wanting to kick something because I read a nearly good book.

I wouldn’t feel comfortable recommending this book.  If a second edition comes out, however, I recommend grabbing it with both hands.  I sort of hope that Ms Tyree makes two separate stories out of it, because there are at least two separately awesome books in there.  I shall definitely be watching out for further work from her, as there are some great stories in there and I want to read the awesome ones. 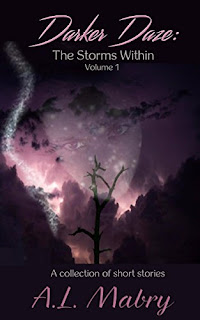 This collection of short stories is not for the fainthearted.  AL Mabry looks unblinking into the darkness that lies within and tells it without flinching.  The stories spread from the modern account of domestic violence to the story of a witch’s execution in an historical setting to a fantastic tale of demons and their demands.

To be honest, it scared the life out of me.  It is not a collection that makes for easy reading.  It is disturbing precisely because of the chilling insight of the author and the clarity of the writing.  I think it’s a great collections of stories, but I’m too chicken to ever read it again!

You can find this book on Amazon and other leading stores.